“Can I write Web applications in Swift?” was a random question that popped into my head a few weeks ago after discovering Swift.org, a project that moves Swift programming language out of the domain specific role of replacing Objective C as the defacto language for building apps targeting Apple’s iOS and OS X platforms and into the Open Source ecosystem. The answer is, yes, thanks to the work being done by Perfect.

I have been curious about Swift since it first came out, though I am not a mobile developer. Recently, in a job interview, I spoke to the mobile team at a digital media company, and the iOS developer raved about the language, which led me down the rabbit hole. Seeing that Swift is capable of being a general purpose programming language, and that it can run on Linux makes me optimistic that organizations with strong iOS offerings may be able to run full-stack Swift applications similar to what Node.js / Web developers currently enjoy. The core advantage of Swift, of course, being not JavaScript. Whether Swift becomes a mainstream server-side language outside of the Apple fanpeople’s realm is anyone’s guess, but it is intriguing enough that I will be giving it a try over the next couple of weeks.

Today’s effort was seeing if I could get Swift and Perfect up and running on my Ubuntu 16.04 machine. Swift.org offers binary downloads for Ubuntu 14 and 15, but not 16, as of today. However, being lazy (or arguably organized) and wanting to used apt to manage the installation, I instead found this Swift package for Ubuntu 16.04, which, following the instructions, worked flawlessly, though it did involve editing my .bashrc file to include the package’s binary directory in my user’s PATH variable.

After installing the Swift compiler, I downloaded the Perfect sample project and built it, as per Perfect’s instructions. My first attempt at compilation failed, as I received the error:

This seems to be a common dependency problem, and after a little digging, I was able to get the compilation to complete by running the command sudo apt-get install uuid-dev to install the uuid development package for Ubuntu. Easy peasy, right? 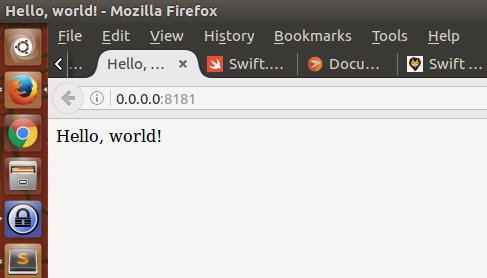 The next step for me will be to try and build a working Web app on Linux in Swift using the Perfect library. Whether I find the language as pleasant as some iOS developers remains to be seen, but it seems like it is an experiment worth trying.